skip to main | skip to sidebar


Visit this site for continuously updated information on the bouldering available in Boulder Canyon. Use the links to the right to locate problems in given areas. I will be reworking the format of the site and am always open to updates and news. Contact me via this blog, 8a.nu, or Facebook if you have problems you want included. Happy Bouldering!

A plethora of bouldering opportunities await in the vicinity of Castle Rock. This area has been transformed into one of the centers of hard bouldering on the Front Range with problems such as Midnight Express and Cage Free and its ease of access makes it a natural place to visit.

Drive west up the canyon roughly 12 miles from Boulder to an obvious 200'+ formation on the left. Turn left (be careful!) onto a dirt road that circles back east. Park on the west end to access Hardboiled and further east for the Citadel and other problems. The bridge just below Country Club Crack is a useful landmark. 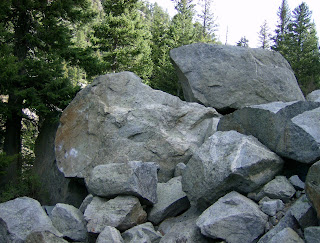 The Egg area. Nintendo is the short arete at the top, Hardboiled is just below on the smooth slab. 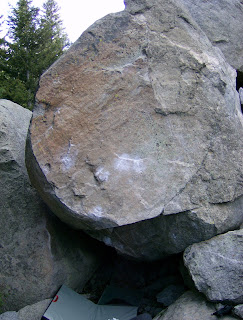 The starting holds for Hardboiled are the two lowest chalked ones in the photo. Not my tick marks...


This boulder is small but desirable, holding a very difficult but doable V9/11. This curious grade is due to the use of kneebarring on the lower half of the problem. To locate it, head west along the road about 200 yards from Castle Rock and look for low water that allows a stream crossing. The log jam has been cleared away. If the water is very low, you can cross at the parking area but this may be trespassing and should be avoided. From the log crossing, move up the slope and trend west across talus beneath several popular ice climbs. Just west of the talus is the Egg, invisible until you go around and see it from the west. Though not very tall, the landing area is very rocky--bring as many pads as you can. It starts coming into the sun at about 9:30.

1. Hardboiled V9/11
A Boulder Canyon classic though dismissed by some as scrunchy and weird. Start low in the obvious cave at a fin feature for the left hand and gun for the lip. A potentially heartbreaking slab section awaits. To bring the grade down considerably, strap a kneepad on your right leg and work the two or three kneebars that are available. Do not claim V11 for this method.
FA Daniel Woods

2. Softboiled V7/8
Start with your right hand on the edge just above the lip and your left hand on the good edge below it. Finish as for HB. Starting on the right, stepping off the slab to do the end is probably V3/4.

3. Replacement Killers V10/11 Start as for Hardboiled but move left up the arete. Heelhook action and slopers. The good left sidepull is history as of May 2010. The same kneebarring possibilities for Hardboiled reduce this problem to V10. See video for this problem.
FA Chris Schulte

4. Southwest Arete VB
From the obvious incut ledge, do a surprisingly tricky mantle to the top.

4. The South Face V3
Start just right of the arete on two small holds on the South Face. Reach right to a sharp crimp and make a dicey reach to a poor crimp up and left. Only two moves but miserable feet.

5. Nintendo V4
This climbs the striking but short double arete on the boulder above the Egg. Sitstart. Watch a fall to the left as it could be very dangerous. Mantling direct would be harder and scary, otherwise traverse off right.

6. The North Slab V0
Climb the nice edges on the slab just north of the Egg. Tree branches make topping out difficult.

There is a sick-looking project on the boulder just north/below of the Egg. Also the TR seam with chalk-marks just south of the egg on the main cliff looks desperate. 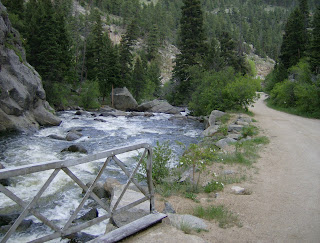 A view of the boulder from the bridge below Country Club Crack.

This is the obvious large boulder on the north bank of the creek, just east of the bridge below Country Club Crack. It holds a number of difficult testpieces including the namesake V8, Surface Tension V10, and Cage Free V13.

It can be approached from just east of Castle Rock, just before the guardrail starts, by heading down a steep slope to the creek. During low water, the creek can be easily crossed as well from the road just past Country Club Crack. 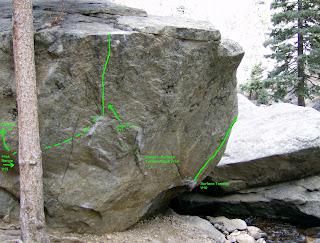 Standard Bulge V5
Though the history and name of this problem are unknown, its committing moves and quality rock make it an instant classic. On the side opposite from the stream, start on sidepull/undercling crimpers at chest level, pull to more crimps in the bulge and slap oppositional slopers before a committing toss to the good sloper lip. The disconcerting rock in the landing pads up well.
(Justin J's description from FRB)


There is a sit-start to this as well, coming in from the Citadel that is V7


The Citadel V8
From a low start, climb the NW arete on crimpy slopers . Technical and slippery.
FA Will Lemaire

Cage Free V11
Just right of the tree, find a terrible sidepull for the left hand. Pull on a bit down and to the right on an OK undercling, reach left for the sidepull and throw for the flat lip with the right hand. One move but it's a long one.
FA Johnny Goicoechea after significant hold breakage, Wade David previous FA

Surface Tension V10
Start low on the SE arete, over the creek, on an obvious flake. Move up to the arete (heelhook on the left) and finish. Best to wait for low water on this one.
FA Wade David, named Excite Bike, rechristened by Chris Schulte and the name stuck. Funny how that works...

FA: Justin Jaeger, 2004. This is the stand version of Surface Tension.

The Citadel Project V13+
Start on the crimps of Surface Tension and head left to join Cage Free. Word is that the moves all go. This winter? 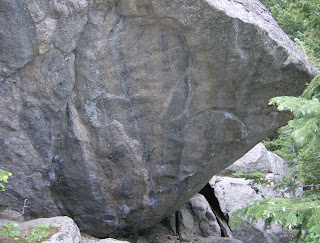 This is a large boulder/outcropping just south of Castle, Rock uphill from the bridge. Midnight Express (V14) starts low on the right and goes out the obvious flake. The crack to the left is Trainspotting (V12) 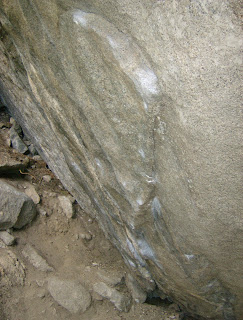 Midnight Express V14
FA Tyler Landman November 2007. Midnight Express offers very powerful climbing low and bold moves at the top. Start low on a flake LH and a poor pinch RH. Do a powerful cross to a sharp undercling LH. Reach right along the flake to an OK pinch, catch a thin crimp LH and go very big LH to the shelf. From here the problem gets much easier but a huge drop presents itself as you approach the lip.

A toprope anchor is in place to ease working this out.  Otherwise bring many pads and spotters.

thanks for embracing stand starts to sit start problems... as is my case for the validity of 'no more greener grasses' from the matched good crimp.

regardless: for additional info, check my boulder canyon update on FRB that is illogically located under the "what's new" link on the main page.

There is alternative, albeit limited, parking for The Citadel Boulder out on Boulder Canyon road that is just ABOVE the boulder. 30 yard approach, no water crossing.

Peter, hi how are you. the Surface Tension Problem I made the first ascent a year before chris did and I named it Excite Bike, but it's more know by the name Chris gave it. I also did the first ascent of cage free, but it was much easyer when there was the big tufa looking flake out left to grab, it was yarded off by Johnney before he did the first ascent of the Jump version. Thanks and I hope you will correct surface tension.

Thanks Wade and Chip. I will update ASAP

Yo Peter,
I spent a couple days on Replacement Killers over my winter break and ended up playing on some other problems that didnt have any chalk or signs of life. One was about V7, an arete, and just up the hill from Hard Boilded, a bit scary, I was calling it Separation Anxiety. The other is v10ish and super quality steep climbin, I couldnt finish this one. I'll put a post up on Littlephotonthatcouldnt soon. Let me know if ya want photos to add to the site. I'm curious if anyone else has tried the 10ish problem.

Hi Matt,
Sorry I missed your comment. Sure, send me an email or look me up on Facebook.

Search here for problem names, areas, or by grade

Areas Covered in this Guide

Some thoughts on Bouldering and this Guide

Bouldering has exploded in popularity in the last ten years and this shows no signs of lessening anytime soon. Guides and other references have a part to play in this popularity and this guide is no exception.

However, I would like to state up front that Boulder Canyon, like any other outside climbing area, should be treated with a great deal of respect and appreciation and not like a giant playpen.

Trash, including cigarette butts, wrappers, tape, and anything else that nature didn't make. Never stash your pads anywhere but especially not here. If I find any, they will disappear. I encourage everyone to remove clearly stashed gear of any type . No boulder in the Canyon is more than 10 minutes walk from the road.

Noise, including obscenities, shouting beta, spray, etc. is weak. Keep it quiet, even near the road and river

Huge posses--break it up and move elsewhere. This isn't the rock gym.

Tick marks--erase them all when you are done. And clean up any spilled chalk.

Chipped holds are unacceptable everywhere. Glue is bogus--if a hold breaks, it breaks.

Messing with holds by means of blowtorches, rubbing alcohol, wire brushes, pof or other nonsense is weak. If you can't hang on try a different problem. Friends assert that rubbing alcohol is not a problem but I am more of a purist on this point

Don't destroy vegetation or alter the base. Think before taking out moss or lichen. Creative and thoughtful use of multiple pads can compensate for most situations.

No %&##ing fires in the canyon. Ever. If it's too cold there are at least 3 indoor gyms 15 minutes away that are plenty warm.

Respect private property and other visitors' experiences. Bouldering is no more important than someone's fly-fishing session. Be aware of property lines and ownership issues and when in doubt, stay out.

Media depicting problems/areas in the canyon should emphasize a leave-no-trace ethic.

Climb at your own risk. As much as possible, don't harm the environment to make things safer, more fun, etc. Come back when you are stronger

Blog Guides and other Online Sources